RPLAS affiliated researcher William Wardley took science to the pub last night in Camden. He was taking part in The Pint of Science Festival which runs annually in venues across the UK. The King’s College London Physics Department is in residence at The Colonel Fawcett in Camden (23rd-25th may) with talks on gravity and cosmological inflation. 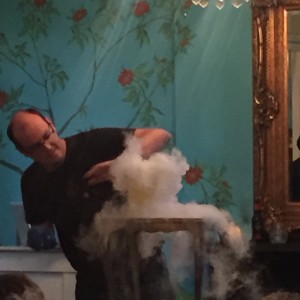 The Pint of Science festival aims to deliver interesting and relevant talks on the latest science research in an accessible format to the public – all in the pub! In 2012 Dr Michael Motskin and Dr Praveen Paul were two research scientists who started and organised an event called ‘Meet the Researchers’. It brought people affected by Parkinson’s, Alzheimer’s, motor neurone disease and multiple sclerosis into their labs to show them the kind of research they do. It was inspirational for both visitors and researchers. They thought if people want to come into labs to meet scientists, why not bring the scientists out to the people? And so Pint of Science was born. In May 2013 they held the first Pint of Science festival and it quickly took off around the world.